Finding good CBD nugs online can definitely be a hassle. Unfortunately, a lot of the companies that claim to sell CBD nugs online are actually only selling industrial hemp knockoffs. Industrial hemp is grown for manufacturing purposes to make products like clothes or cloth, yet many companies grow them and pass them off as authentic CBD nugs.

Although industrial hemp can be grown in a way that is smokable, they don’t contain nearly the same quality as authentic CBD flowers. This is why we consider organic CBD nugs to be top shelf hemp, because they excel in quality over industrial hemp flowers.

Why the difference in quality? To put it plainly, industrial hemp is grown for quantity and yield—while CBD nugs are grown for quality, both in taste and effects. Because of this, authentic and organic CBD nugs are the ideal option for those looking to treat anxiety, depression, chronic pain, or other physical or mental health conditions (they’re equally good for just relaxing or taking the edge off, too).

Consequently, though—because industrial hemp and organic CBD nugs are marketed similarly—finding CBD nugs that are actually authentic and organic is a difficult task. However, it’s definitely worth the search.

Below are four reasons why we consider organic CBD nugs to be top shelf hemp. And to make your CBD nug search a little easier, we’ll also include some of our favorite CBD hemp strains tailored for specific tastes and personal preferences.

Read Also: The 5 Best CBD Nugs You Can Buy Online (And Their Effects)

One of the primary differences between top shelf hemp and subpar or industrial hemp is the percentage of CBD within each flower.

Top shelf hemp flowers are specially bred and grown with an emphasis on CBD concentration. CBD nugs themselves (such as those sold at Dreamland Organics) usually average 12% to 15% CBD. Compare this to most cannabis strains, which contain less than 0.20% CBD. The difference is shocking! Even industrial hemp only contains up to 3% CBD concentration.

One of the biggest reasons people smoke CBD nugs is for their high concentrations, and consequently also for the enhanced medical benefits. CBD is often used to treat and reduce:

Because it has higher CBD concentration, organic CBD nugs are an ideal alternative to prescription medication or even medicinal cannabis. Not only do they contain high concentrations of CBD, but they also contain very little THC (trace amounts at >0.3%) so they won’t make you feel high or intoxicated.

Keep in mind, though, that CBD concentration isn’t everything. Terpenes, trichomes, and minor cannabinoids also play an important role in potency and quality. As such, top shelf hemp usually contains all of these.

Want a high CBD strain? Then our strain recommendation is Kimbo Kush.

Named after the late MMA star Kimbo Slice, Kimbo Kush is an extremely potent indica CBD strain. At 17%, it has one of the highest concentrations of CBD you’ll find anywhere on the market. This heavy-hitting strain is also full of terpenes and tastes similar to vanilla coffee.

Terpenes are special chemical compounds found within top shelf hemp that give them their unique flavors and aromas. They make a big difference in the quality of hemp flowers, as hemp flowers with better terpenes typically taste better.

Similarly, many terpenes are also somewhat responsible for the physical effects attributed to each strain. Thus, better quality terpenes also equates to more potent CBD effects. In fact, terpene combinations can be known to cause “the entourage effect” that you may have heard about. This is a heightened sense of relaxation and mental clarity that certain combinations of terpenes and cannabinoids can induce.

Below is a brief graph of a few of the most common terpenes found within CBD nugs as well as their associated aromas: 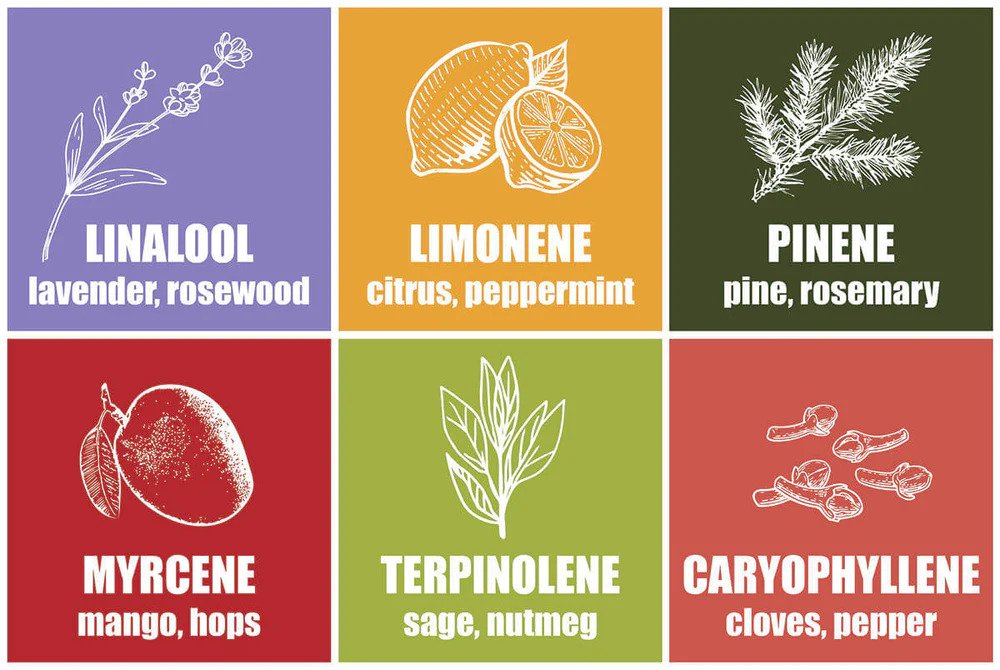 Most types of terpenes are prevalent in a single CBD nug, some trace amounts and some more highly concentrated. Likewise, some terpenes are more present in different types of hemp than others.

For a general rule, sativa CBD nugs are typically citrusy or floral in profile. Meanwhile, indica strains tend to be more earthy. Though, these flavors can still vary from strain to strain, so some exceptions apply. Hybrid strains on the other hand can often lean to one side or the other or contain elements of both.

If you’re looking for a tasty, unique terpene profile then try out Immortal.

Immortal is an exotic purple hemp flower with one of the most unique flavors of all our top shelf hemp: sweet grape jam. As an indica dominant hybrid strain, Immortal produces feelings of calmness and relaxation without making you too sleepy.

Minor cannabinoids are chemical compounds within CBD nugs that produce their benefits and effects. Don’t confuse cannabinoids with terpenes, though; while terpenes mainly produce the aromatic properties of top shelf hemp, cannabinoids play a bigger role in the medicinal and physical effects.

Most of these minor cannabinoids are in trace amounts, usually less than 0.2%. But because there’s so many of them, they play an important role in creating the genetic code that creates top shelf hemp. Minor cannabinoids can be bred to be more or less present in an individual strain, which can consequently alter their effects and benefits little by little.

One of the most famous minor cannabinoids in CBD nugs is cannabigerol (CBG). CBG is very similar in effect to CBD, but some studies have claimed that it is even more effective at treating inflammation. Additionally, CBG is especially effective for treating anxiety, epilepsy, and a number of neurological conditions such as Parkinson’s disease.

At 14% CBG, Lavender has one of the highest concentrations of CBG of any craft hemp flower on the market. Hemp flowers high in CBG are a rarity, which makes Lavender especially exotic and unique. As the name suggests, it has a citrusy lavender aroma.

As always, we at Dreamland Organics always recommend using only organic CBD nugs. In order to truly be top shelf hemp, CBD flowers should always be grown using only natural processes and without the use of chemical fertilizers or pesticides.

Why is organic so important? Because non organic CBD nugs can pose hazards to your health. Namely, synthetic fertilizers and pesticides can often contain toxic chemicals. These toxins can survive through the growing, curing, and distributing process in trace amounts and make their way into your lungs and body.

Although smoking one hemp flower grown with toxic elements might not kill you, they can cause severe health problems long-term. Many of these toxic chemicals are carcinogenic, and long exposure can cause different types of chronic conditions such as cancers, immunotoxicity, and numerous neurological diseases.

Also, non organic CBD nugs simply taste worse. Many of them may have a bitter aroma and can be harsher on your lungs and throat when smoking. Comparatively, top shelf hemp flowers should always be smooth, tasty, and overall pleasant to smoke.

Read Also: Organic CBD Nugs : Is It Worth Buying Organic?

The best things in life are top of the shelf. CBD nugs are no exception.

Unfortunately, with so many industrial hemp knockoffs available, it can be difficult to find truly authentic and organic hemp online. But here at Dreamland Organics, we’re dedicated to growing only the best and most authentic top shelf hemp possible. All of our CBD nugs are grown naturally in living soil, outside in fresh air and direct sunlight.